On his own work

Certain moments, hardly noticed at the time, can in retrospect seem to have had direct designs upon the future, opening up perspectives, emotional and physical, into a new space. Remembering how I began to write this book, at the back of my mind is a field of dry grass and orange-yellow Californian poppies on the Pacific coast ten miles south of Santa Cruz , USA . This piece of ground doesn`t actually appear in the book itself, but its scent, its softly calcifying, wind-blown gulleys with ocean beyond are the atmosphere in which these poems first started to breathe. The landscape itself is still and uneventful, while the poems themselves are anything but. The experiences which began with a family group walking across this field near their house involved far more than the distant surf, the scent of sunny grass and eucalyptus. Nor could these people have known what changes were poised at the time to strike. The poems are fragments flying up out of the ground, as if from some invisible explosion. They originate from a place which offered no sign. That one or two experiences can change people not just immediately but years afterwards is extraordinary, yet most story-telling nourishes this assumption. The aim of this book is to make the explosion visible, not just lost in the air. Summer, 1999

Poets I Go Back To

In 1968, my second year at university, I read two or three books (two of them poetry) that influenced my thinking and writing for at least two decades. Whether the influences have worn off I don`t know; maybe they never do. I go back to the actual texts quite rarely. I go back to the shape they left in my mind very often. The first is Helen Gardner`s anthology The Metaphysical Poets , the second is Ted Hughes` Wodwo – partly for its links with the fourteenth century poem Gawain and the Green Knight which was written, allegedly, in an area of the Pennines near Macclesfield, twenty miles or so from where I grew up. Wodwo, a kind of revisiting of the landscapes of the Gawain poet, was also a new way of writing free verse, while from The Metaphysical Poets I learned, among other things, about stanzas and how they work, what they can do. Its pages were full of them – Marvell`s `The Garden` , Donne`s `Nocturnal Upon St Lucies` Day`. The other book was C.G.Jung`s study of tribal culture and its importance in psychoanalysis: Modern Man in Search of a Soul. If I could, I would explain how it was that these three books (four counting Gawain ) had somehow got tangled up in my mind. Maybe I can explain. I certainly couldn`t at the time. I was studying literature at Edinburgh University in the late sixties, early seventies. Edinburgh had something to do with it too – a sawn-off city, hanging loose in the wind: its tenements, the castle rock, volcanic hills – all somehow unfinished. I certainly felt decapitated from England . Travelling north three times a year (Gawain`s journey was northward too) was as if the Green Knight had issued me with a challenge. I was travelling into a new world: bleak, flinty, exhilarating.

The poet Bernard O`Donohoe commented recently at a reading that as you go north the countryside changes gradually but consistently, so that you get hints of Scotland in north Lancashire, then even more hints in Northumbria. I felt this to be exactly true. I felt the Metaphysical Poets were travelling north too – metaphysically speaking:

My love is of a birth as rare
As `tis for object strange and high:
It was begotten by despair
Upon impossibility.

Magnanimous despair alone
Could show me so divine a thing,
Where feeble Hope could ne`er have flown
But vainly flapt its Tinsel Wing.

And yet I quickly might arrive
Where my extended Soul is fixt,
But Fate does iron wedges drive,
And always crowds itself betwixt.
(from `The Definition of Love`, Marvell)

Those iron wedges materialised for me in the Scottish border country. It`s not just that we know this poet is having a hard time – worse than that, the tone is self-mocking. The terms – `Soul… Eternity` are on the way out. He knows it but can`t explain himself either. It`s as if there`s a needle in the poem flickering inconstantly but with increased regularity in the direction of the modern world. Its other direction, with less and less regularity, flickers towards some idyllic alternative, some Heaven, some harmony, and this is what the Metaphysical Poets are like – they flicker, continuously this way and that, while knowing which way the needle will ultimately point. Something is happening – something to do with science and the facts of a viciously material universe, growing in volume and noise – which is smashing up their high spiritual-aesthetic standards, their `hope`. They are on a journey too, and are having their precious spiritual-religious heads cut off. Partly they welcome this (Donne welcomes it more than the rest, perhaps, at times, or tries to find a latter-day re-connnection). Partly they are in a state of despair. Donne certainly was, as we know from his sermons.

The irony is that anyone who stares into that abyss always invents a chimera, a Ghostly Something (or somebody) who represents its opposite, an escape. This Something could be a lover – real or imagined – someone with dew on his brow ( Vaughan ) or the `little room` where lovers are loving (Donne). The best of the Metaphysical Poets – Donne, Marvell, Vaughan, Herbert (these are the poets in the book I go back to) continuously try to mix the material universe with an immanent spiritual reality. They will not have it that these two should part. They will not have it because if separation should occur, they would be on the side of the material. They know this, and that is why they fear the outcome so much, why they have such struggles with their conscience, and why we admire them. Their prayers should suffice, but prayers do not suffice – that is why there are poems, why there are stanzas standing there like little palisades of safety and defence – like `rooms`. These poets all declare allegiance to the material; they all admit to chaos, death, and what follows, just as they also celebrate things as they are, the simple objects of our common surroundings. The stanzas in Helen Gardner`s anthology are those of our first true modern poets.

So what has free verse to do with it? I remember the day I bought a copy of Wodwo at James Thinn`s bookshop in George Street. I`d enjoyed Hughes` first two books – all written in stanzas. I thought – Well let`s see about this one then, and took it home. I didn`t like it. For about three months I resented its long straggling lines, its untidiness. Then, it suddenly got hold of me.

Ghosts, they are ghost crabs.
They emerge
An invisible disgorging of the sea`s cold
Over the man who strolls along the sands.
They spill inland, into the smoking purple
Of our woods and towns – a bristling surge
Of tall and staggering spectres
Gliding like shocks through water.
Our walls, our bodies, are no problem to them.
Their hungers are homing elsewhere.
We cannot see them or turn our minds from them.
Their bubbling mouths, their eyes
In a slow mineral fury
Press through our nothingness where we sprawl on our beds,
Or sit in our rooms. Our dreams are ruffled maybe,
Or we jerk away to the world of our possessions
With a gasp, in a sweat burst, brains jamming blind
Into the bulb light. Sometimes, for minutes, a sliding
Staring
Thickness of silence
Presses between us.
(from `Ghost Crabs` – Wodwo )

This spoke to my youthful anxiety, in exile, and to my feeling about rooms and landscape-atmosphere. It was England , but with Scotland – or ` Scotland ` – superimposed. The needle flickered again between the two. I remember reading the poem to a group of post-graduates, who found it `revolting`, as many readers probably still do. It seemed to me amusing, even while it made my hair stand on end. It would be nothing without its actual words – the `smoking purple` of woods and towns – so exact yet casual; the blunt summary: `we cannot see them or turn our minds from them`; and the question of how eyes `press` through nothingness: a drama with its roots deep in the language, and in some of the poems able to bring about what I then thought of (and still do) as new events in language – the long sentence that opens `Full Moon and Little Frieda` – Nobody had ever invented one like it. One of the few poems with a regular shape, `Pibroch` haunted me not just because it conjured a highland landscape. It was something to do with the word `occasionally` in the poem`s second stanza.

I felt, if I could write some poems like those in Wodwo and some like Metaphysical poems, and write about my journey – which was also about growing up and out of England – then I could get hold of what poetry was about – not just writing poems but being inside certain kinds of experience. The Jung book was something to do with that too – a sense of what the word `modern` perhaps signified, though to be fair to my younger self it was the first book I`d read on the subject. That point when things suddenly flared in different directions, and lit up more than I`d ever realised existed, was, I emphasise, at least in part, a discovery of language, that there are things just simple words can do if you put them together in the right way. And there were other occasions for this discovery: Larkin and from there back to Hardy`s poems, then Lawrence (who for a time made regular stanzas impossible!) then William Carlos Williams… 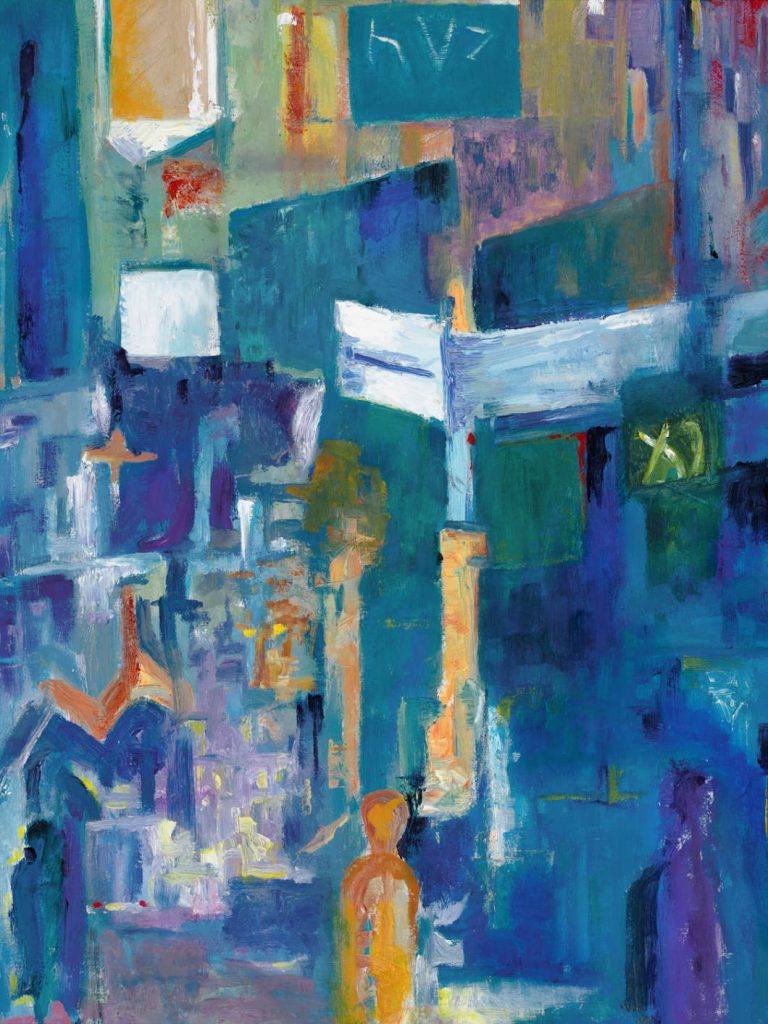